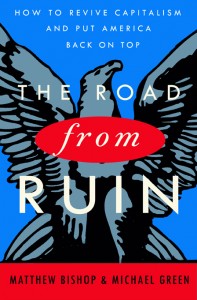 Another post, another book to add to the list. This time it is The Road from Ruin by Matthew Bishop and Michael Green. It is a highly readable, well written analysis of where the glogal economy has been and what can be done to fix it by two world-class thinkers. Here’s a link to their site. Bishop did a story on the MBA Oath for the Economist last year when we were first getting the movement off the ground. Our initiative seems to have made an impression, because Bishop and Green seem to argue that professionalizing business is what the future should be about. Bishop and Green argue that,

“Capitalism as we knew it ended on September 15, 2008, the day Lehman Brothers went bust.”

If capitalism is “dead,” as Bishop and Green argue, the question is what will replace it? Bishop and Green go to some lengths to give their answer. In chapter 8, they argue that part of the answer may be a renewed capitalism with a focus on professionalism – on of the key ideas of the MBA Oath.

“The current crisis of capitalism is in part a morality tale, but it is not a simple one. And it owes at least as much to failures of design, especially too much reliance on short-term measures of success, as it does to ethical lapses…. Increasingly, employees throughout the system were paid to maximize short-term financial returns, such as every-expanding quarterly earnings and rising share prices. There were no rewards for asking tough questions about whether what was good in the short term was also good in the long run. Even regulators kept quiet.”

The authors go on to explain how this isn’t the way things were supposed to be. They look back into history and find that when business schools were first founded, they were founded on the idea of making management a profession:

“In 1925, at the newly created Stanford Business School, Wallace Donham, the second dean of HBS, gave a speech, “The Social Significance of Business,” in which he declared that the “development, strengthening, and multiplication of socially minded business men is the central problem of business.”

Donham feared that as scientific, technological, and material progress accelerated, the traditional sources of professional ethical leadership (such as the law and the clergy) would be unable to cope, and that it would fall to the “new profession of business” to save modern industrial civilization from itself.”

Bishop and Green essentially ask the same question that we have been posing for the past year: if business schools originally set out to make management a profession, why not return to that noble goal? Perhaps the MBA Oath is helping pave the road from ruin to a better future. We think so.

The MBA Oath is a voluntary pledge by MBAs to create value responsibly and ethically, administered by a volunteer team of MBA graduates.